We are now used to being impressed by the beautiful astronomical photographs in magazines, newspapers and on TV. For me however, there are three photographs which stunned me when I first saw them, and still intrigue me today. The first was taken back in 1968 by the crew of Apollo 8. It shows the Earth rising over the edge of the Moon. Our planet, with its blue oceans and white clouds, looks so small and so attractive compared with the sterile, grey lunar landscape and the hostile black of space.

Earth rising over the limb of the moon

photo by the Apollo 8 astronauts

The second picture is also one of the Earth from space, but this by one of the Voyager spacecraft, from the far outskirts of the Solar System. Voyager was so far away on its one-way trip that its radio transmissions took several hours to get to us. One of the photographs transmitted back to us shows the Sun. Close to it, almost lost in the glare, is a blue dot — the Earth. Imagine our world, with its billions of people, and all their history and culture, looking so small and insignificant against the vastness and mystery of space. However, another way to look at it is that we have penetrated so far from home in our explorations that our world looks like a small dot.

The earth as seen from beyond the orbit of Neptune,

some 3.8 billion kilometers away

The third picture was taken by the Hubble Space Telescope. Known as the “deep field”, it shows a small patch of sky in a direction well away from nearby stars and galaxies. The picture shows galaxies, thousands of them, extending out as far as we can see, to the point where their light is taking billions of years to reach us.

It is both sobering and challenging. On one hand, the vastness of space makes our tiny footsteps with Apollo and Voyager look laughably small. However, we are also willing to take on the challenge. Through our telescopes we are exploring the depths of space and learning about the birth of stars and galaxies, and the beginning of the universe itself. Within the next twenty years there will be people walking on the surface of Mars. There are designs on the drawing board for spacecraft which could take us to the stars. We might be doing tiny things at the moment, but even Magellan, Cook and the other great explorers started off crawling around the living room floor.

These occasional clear evenings provide a good opportunity to explore the universe. A starmap and binoculars are all you’ll need. Saturn is in the Southwest after sunset; Mars is spectacular in the East in the late evening. Venus is low in the dawn twilight. The Moon will be Full today; the Moon of the Big Sleep.

Ken Tapping is an astronomer with the Dominion Radio Astrophysical Observatory near Penticton, B.C., part of the NRC’s Herzberg Institute of Astrophysics 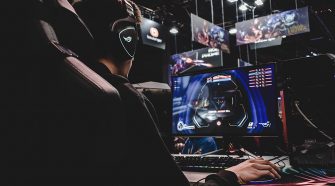